On Monday, July 28th, the fabricator emailed saying the first modbox had been assembled and asked if I wanted to stop by to see it.  Heck yeah! My heart started racing.  Very excited.  No doubt, many of the Kickstarter backers would have liked to come too. Thanks again to all the backers that helped create the modbox!

Andy, who did the CAD models joined me. Thanks again Andy! When we entered the office, we were both grinning like proud new parents.  It’s one thing to see the 3D images and say “yes, that’s it.”  Actually seeing and touching a fully assembled modbox and post took it to a new level.  Very cool.  [In our excitement we took the pictures as if it was a price bass fish, holding it out front, thus making it look bigger than it is!] 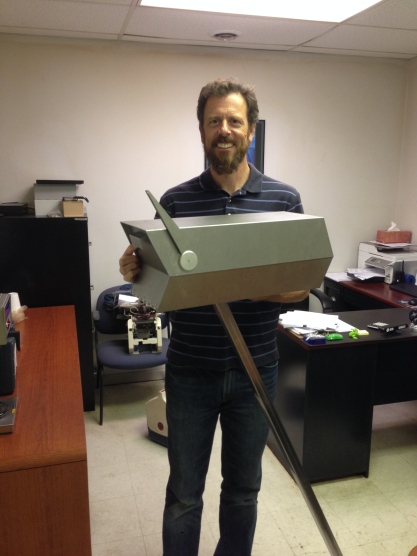 A big thank you goes out to the fabricator and all their highly skilled folks with a ‘can do, we’ll get it done attitude.’  With the validation of the production process and assembled product quality control completed the fabricator moved into full production.  I was anticipating that production might be completed over the next two weeks.

When I visited on Monday, August 8th, I realized there is still a learning curve during the first full scale production run.  It was comforting though to see stacks of cut parts with almost everyone on the production floor working on the modbox!  The images on the left are the laser cutter and the front doors that were being cut.  The images on the right are the stamping machine that does the ribbing on the floor along with the stack of 350+ laser cut floors.

Hopefully, over the remainder of this week things will accelerate as the fabricator focuses on the modbox.  Everyone has been patient, positive, and encouraging.  Thank you!